Bills and Josh Allen walking into the Jets’ White House

Welcome to the White House.

No Secret Service necessary. No political footballs allowed to be thrown. No agenda to pass.

Not Josh Allen versus Sam Darnold.

Not Josh Allen versus Zach Wilson.

Everyone loves the underdog, everyone loves the backup quarterback, and so Allen and the powerful Bills will bear witness to a White-hot love affair that has captivated New York and a hero-starved Jets fan base.

“Mike White,” they chanted the last time they saw him, when he had the game of his life, and the game of some of their lifetimes. “Mike White” they will chant again Sunday, for as long as White can stare back at Allen and refuse to blink. 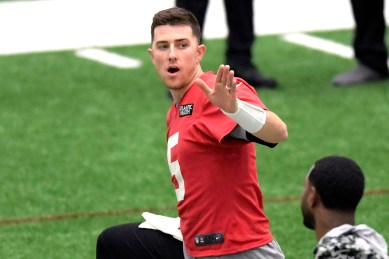 “I loved it,” Jets rookie running back Michael Carter said, “ ’cause I feel like it was a great opportunity for him to rise to the occasion, and he did more than that. … He deserved that moment.”

He deserves this moment, and with Wilson instructed to rest his wounded knee and follow the sage advice of one Yogi Berra — “You can observe a lot by watching” — White will look to prolong this exhilarating honeymoon for as long as he possibly can.

Jets fans who have waited 53 years for a second Super Bowl championship shouldn’t have a problem waiting for Wilson to get off the canvas, get back in the saddle (whenever that will be this season) and start becoming the star he was drafted second overall to be.

In the meantime, if this were Election Day, White would win the popular vote, and maybe by a landslide.

While Wilson too often has looked like a fish out of water, White showed up as a Great White shark and took one small bite after the next out of the Bengals’ defense. He appeared poised to do the same to the Colts defense before his two middle fingers went numb and he couldn’t grip the ball.

You can be a short-suffering Jets fan and feel like a long-suffering Jets fan. Since the 2010 AFC Championship game loss at Pittsburgh, the Jets are 61-107. The playoff drought will reach 11 seasons this year. Wilson was 1-5 when he went down. Which should not have surprised anyone, especially Jets fans — rookie quarterback, rookie head coach, rookie offensive coordinator, all that.

Then White showed up and ran the offense as if he invented it, and people are talking about Tom Brady and his rise and head coach Robert Saleh understandably pressed the pause button on Wilson, and on the newly acquired Joe Flacco. 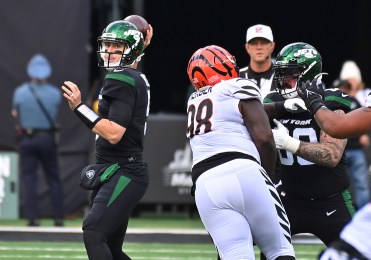 The free agent wide receiver general manager Joe Douglas recruited for Wilson, $37.5 million man Corey Davis, will return Sunday for White following a two-week absence with a hip injury, and not a minute too soon. The Bills happen to own the best pass defense in the league. That’s another reason why it was the right move to give Wilson another week to rest his sprained PCL … because at this stage of his development, he has not shown that he can move the ball down the field the way White can.

Wilson is right when he says his time will come. It just won’t come Sunday at 1 p.m. at the White House.

“[Wilson] wants to be great, just like I do, just like guys on our team are,” Carter said. “But like he really takes it serious, and he’s very methodical with everything he does in practice, there’s no bad rep for him. In games, if he’s thrown an interception, I guarantee you he’s learned from that.”

Wilson was forced to learn nine times. He has also learned that it is far easier playing against Coastal Carolina than it is against Bill Belichick’s Patriots.

It turns out White might have been the best backup quarterback in the NFL, and no one knew it. Not even the Jets themselves could possibly have envisioned him throwing for 405 yards in his first NFL start. The contrast between the prized rookie franchise quarterback and the unknown afterthought backup quarterback was stark: Wilson often looked overcaffeinated in the pocket. White has looked like Sully Sullenberger landing a plane on the Hudson River. The difference was as clear as Zach and White.