With Luka Doncic missing, KP exiting and COVID festering, nothing is going right for the Mavericks

MINNEAPOLIS — For four days before facing the Timberwolves, the Mavericks experienced significant losses. In overtime heartbreak to the Lakers. In player...

MINNEAPOLIS — For four days before facing the Timberwolves, the Mavericks experienced significant losses.

In overtime heartbreak to the Lakers. In player and assistant coach additions to the COVID-19 list. In their hope that the virus wouldn’t disrupt their core like it ravaged them last season.

The sluggish finish wasted a season-best scoring performance from Dorian Finney-Smith (23 points, 9 of 13 from the field) and a game-high 28 points from Tim Hardaway Jr. in his first start since Nov. 29.

To compound the loss, Kristaps Porzingis left the game with 4:59 left in the third quarter with right foot soreness and didn’t return. Head coach Jason Kidd said X-rays on Porzingis’ foot were negative.

In a game many expected to be a showdown with Timberwolves center Karl-Anthony Towns, Porzingis’ disjointed night — 13 points on 2 of 9 shooting from the field and three rebounds in 23 minutes — reflected the Mavericks’ short-handed shortcomings, too.

“I think it’s similar to last year, especially for us, that time when we played Denver and we had like four or five guys [go] out,” Hardaway Jr. said of the deja vu feeling around the team. “It’s going to be that stretch where guys that haven’t really played that many minutes are going to have to come in and contribute.”

The NBA postponed three games Sunday and one apiece Monday and Tuesday with Cleveland, Orlando, Philadelphia and Brooklyn dealing with significant COVID-19 outbreaks. Coupled with the two Chicago postponements last Monday, the NBA has called off seven games in the last six days after postponing 31 last year.

The spread amongst Mavericks has been — at least so far — more limited.

Come Sunday, Green and assistant Jared Dudley, who had traveled to Minnesota, joined the COVID-19 list. The team said Ntilikina’s absence was not COVID-19 related.

“We talked about it before the Laker game [Wednesday] — with the Lakers having COVID issues — how concerned we were, being a team that didn’t have any COVID issues up until that point, until after they left,” Kidd said. “Now we have COVID issues.”

The Lakers put three players and a few members of their travel party on the COVID-19 list a day before their near-buzzer-beater overtime win in Dallas and added a few more afterward.

When asked directly whether the Mavericks believe their outbreak stemmed from interactions with the Lakers, Kidd joked his medical expertise didn’t cover contact tracing.

“But some who would be into betting or guessing,” Kidd said, “some would say that’s where it came from.”

Luka Doncic (left ankle soreness), Willie Cauley-Stein (personal reasons) and two-way rookie Eugene Omoruyi (right foot injury) were also not in Minnesota, so Dallas had just 10 players from their 15-man roster available in the first of two consecutive games against the Timberwolves.

After trailing by as many as 10 points, Dallas twice cut the Timberwolves’ advantage to one possession in the last two minutes.

Finney-Smith dunked off a cross-court assist from Hardaway to pull the Mavericks within 2 — 105-103 — with 1:57 remaining. After Towns hit a 3-pointer from the top of the arc on Minnesota’s ensuing possession, Jalen Brunson responded with a layup to make it a 3-point gap with 1:31 left.

But then Sterling Brown missed a 3-pointer, Jalen Brunson committed an offensive foul, and “that’s when the game was over pretty much,” Kidd said.

“If SB would’ve made that three,” Finney-Smith said, “I think we would’ve been in a good spot.”

From here, the Mavericks’ — and the NBA’s — uncertainties with COVID-19 won’t wane.

They were asked not to leave their Minnesota hotel on Saturday night, most grabbing meals in to-go boxes from the team’s ballroom catering set-up. Kidd held coaches’ meetings on Zoom and players went two days without practice.

They didn’t gather as a group from practice Thursday to 40 minutes before the opening tip Sunday. All members of the travel party took COVID-19 tests outside the locker room at Target Center before returning to Dallas, where they’ll play the Timberwolves again Tuesday. 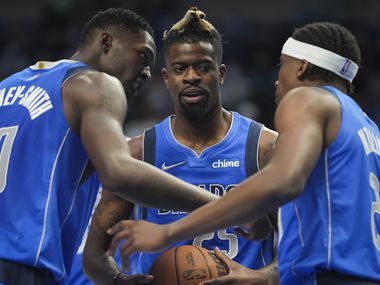 With multiple players, coaches on COVID list, Mavs are concerned their outbreak spread from Lakers